My wife called, ‘How long will you be with that newspaper? Will you come here and make your darling daughter eat her food?

I tossed the paper away and rushed to the scene. My only daughter, Sindu, looked frightened; tears were welling up in her eyes. In front of her was a bowl filled to its brim with curd rice. Sindu is a nice child, quite intelligent for her age.

I cleared my throat and picked up the bowl. ‘Sindu, darling, why don’t you take a few mouthful of this curd rice? Just for Dad’s sake, dear’.

Sindu softened a bit and wiped her tears with the back of her hands. ‘Ok, Dad. I will eat – not just a few mouthfuls, but the whole lot of this. But, you should…’ Sindu hesitated. ‘Dad, if I eat this entire curd Rice, will you give me whatever I ask for?’

‘Promise’. I covered the pink soft hand extended by my daughter with mine, and clinched the deal. Now I became a bit anxious. ‘Sindu, dear, you shouldn’t insist on getting a computer or any such expensive items. Dad does not have that kind of money right now. Ok?’

There were once 2 brothers who lived on the 80th level. On coming home one day, they realized to their dismay that the lifts were not working and that they have to climb the stairs home.

After struggling to the 20th level, panting and tired, they decided to abandon their bags and come back for them the next day. They left their bags then and climbed on. When they have struggled to the 40th level, the younger brother started to grumble and both of them began to quarrel. They continued to climb the flights of steps, quarreling all the way to the 60th floor.

They then realized that they have only 20 levels more to climb and decided to stop quarreling and continue climbing in peace. They silently climbed on and reached their home at long last. Each stood calmly before the door and waited for the other to open the door.

And they realized that the key was in their bags which was left on the 20th floor.

This story is reflecting on our life…many of us live under the expectations of our parents, teachers and friends when young. We seldom get to do the things that we really … Read More »

1. Jawaharlal Nehru was the _______ of Indira Gandhi’s Father. ?2. Make a grammatically correct sentence by using the verb “IS” immediately after the word “I”3. I am having two coins of Indian currency in my pocket, the total value of which comes to 75 paisa. But mind you, one of the coins is not a fifty paisa coin. How it is possible?4. What is taken from you before it is given to you?5. Eventhough it belongs to you, usually others use it, What? 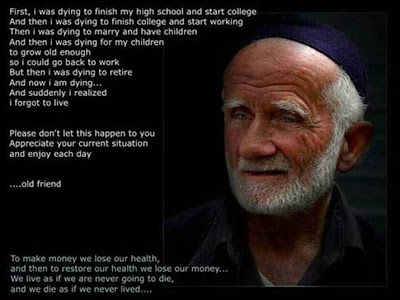 Now it has become easier to get the blood we need. All you have to do is just type BLOOD and send SMS to 96000 97000 Eg: BLOOD AB+ OR BLOOD B+ A BLOOD DONOR WILL CALL YOU!! So please pass this message to all. It certainly would save many lives. It’s a Must to Know & Share. Do it now…. Forward this to all your friends whom you care ….as the minute you spare to share this information can save somebody’s life with rare Blood Group! If you couldn’t be a Donor be a Communicator.

A junior manager, a senior manager and their boss are on their way to a meeting. On their way through a park, they come across a wonder lamp. They rub the lamp and a Genie appears. The Genie says, “Normally, one is granted three wishes but as you are three, I will allow one wish each” So the eager senior manager shouted, “I want the first wish. I want to be in the Bahamas, on a fast boat and have no worries.” Pufffff. and he was gone. Now the junior manager could not keep quiet and shouted “I want to be In Florida with beautiful girls, plenty of food and cocktails.” Pufffff. and he was also gone. The boss calmly said, “I want these two idiots back in the office after lunch at 12.35pm.” MORAL OF THE STORY IS: “ALWAYS ALLOW THE BOSS TO SPEAK FIRST”

Share
Indian girl has heart and liver outside body

A four-day-old female child whose heart and part of her liver is growing outside her body is seen at the north Bengal medical college on the outskirts of the northeastern Indian city of Siliguri November 26, 2008. “This is a very rare case, we are not sure if we can perform surgery to put her heart and liver back, but we’ll try our best,” a child specialist Miridula Chatterjee said on Wednesday. Picture taken November 26, 2008.

London, June 8 (ANI): A man has embarked on an extraordinary journey across the US: to sample 50 careers in 50 States, over 50 weeks.

Daniel Seddiqui is on his 37th job this week as he works as a gardener at Monticello. He has worked as a weather forecaster in Ohio, made cheese in Wisconsin, struggled as a mechanic in Michigan, and joined a pit crew at the Indy 500 track in Indiana.

All of it has been documented on his website, livingthemap.

The economics graduate started on his adventure after 40 failed job interviews.

He bought a second hand car and left his home near San Francisco in August last year, trying to secure employment on the road.

Seddiqui says that the purpose of his journey isn’t just to find a permanent job, but to highlight America’s cultural diversity.

“I’m choosing jobs which depict the culture or economy of the state and I’m also living the cultures of each state,” Sky News quoted him as saying.

“Families are hosting me for the week, so I eat the food they eat, I go to the events they do.